A game called "Gunner, HEAT, PC!" would be sorely lacking without one of the most recognizable "PC" type vehicles of all time: the Soviet-designed Боевая Машина Пехоты (БМП), meaning literally "infantry fighting vehicle".  The BMP series of vehicles, as it is known in the West, has served in countless conflicts, with roles ranging from "battle taxi" to urban fire support.  As the first vehicle in this line, the BMP-1 (introduced in the late 1960s) was a bit dated by the mid-1980s, but it was hardly less capable than intended.  With space for eight infantry passengers and onboard weaponry capable of defeating both armored and unarmored targets, this ubiquitous chariot was a mainstay of Warsaw Pact armies throughout the Cold War.

As part of GHPC's representation of the East German NVA, which often had to make do with somewhat outdated equipment, the game features the early variant of the BMP-1.  This infantry fighting vehicle (IFV) is slightly less advanced than its successors, the BMP-1P and BMP-2, but in large numbers as part of a motorized assault, it's still a serious threat.

This guide will teach you to use the BMP-1 effectively in combat scenarios.

Unlike most of the vehicles in GHPC armed with this many weapons, the BMP-1 is not a tank and is not designed to be used as one.  It's lightly armored, reasonably fast, and has very low survivability if hit by anti-tank weapons. The main focus of a BMP crew should be reaching the objective safely and carrying out the mission, usually delivery and/or support of an infantry squad. 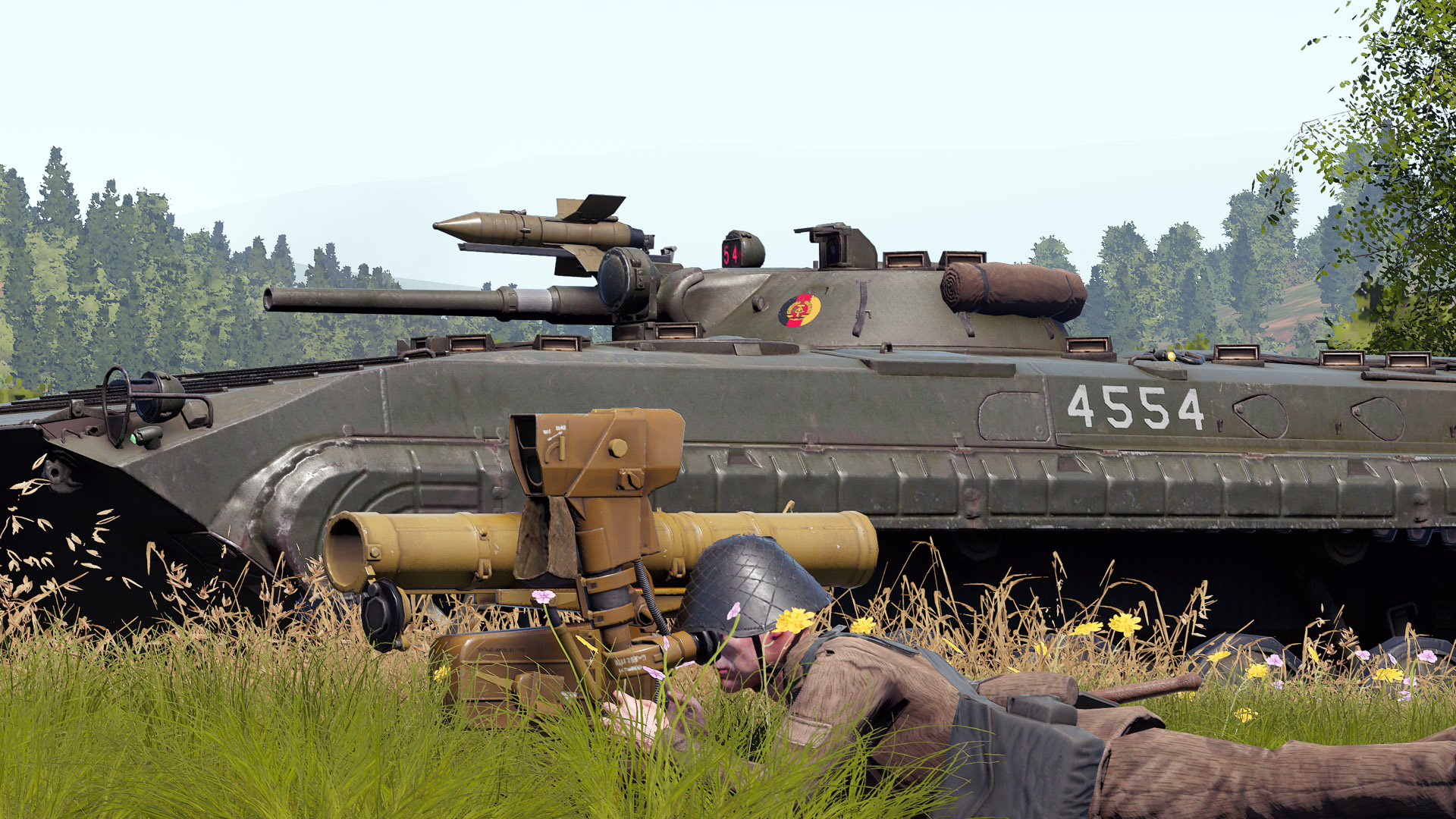 Anyone expecting to use the BMP-1's array of weapon systems to club NATO forces should temper their expectations - the 73mm 2A28 "Grom" main gun is short-ranged and unstabilized with a simple fixed magnification scope, the night vision is as lackluster as usual for Soviet armor, and the manually guided 9M14 "Malyutka" missile system is challenging to steer onto targets.  In a pinch, the BMP-1 can knock out targets far more deadly than itself, but as with any IFV, this should be more of a last resort than a goal.

The BMP-1 is equipped with a simple dual-channel day/night sight: the 1PN22M2.  Though the sight head is mounted on the turret roof, it does not use any kind of fire control system and remains synced to the "Grom" main gun at all times.  To compensate for range or lead, the gunner must use the markings in the sight reticle.

Above: The main reticle of the 1PN22M2 day channel is calibrated to the PG-15V HEAT round, with each number representing a multiple of 100 meters.  The extra markings on the bottom are for the OG-15V HE-Frag round, which is much slower and has a severe ballistic curve.  These extra markings were introduced with the M2 variant of the sight.  As with many other gunsights, the reticle can be illuminated via key press (default: I (i) ).

For night fighting, the BMP-1 has a similar light intensification system to other Soviet vehicles of the time.  The night sight in real life has multiple colored filters that can be overlaid on the optic at the flip of a switch, to allow its use in varying light levels.  This is not currently represented in GHPC.  In addition, as of the vehicle's introduction to the game, the commander's infrared searchlight is not yet implemented.  Night fighting with the BMP-1 will be challenging, depending mainly on ambient light, incidental light sources, and other vehicles' spotlights.

A total lack of sophisticated gunnery systems on the BMP-1 means the gunner must rely on other means for rangefinding.  If the battle position has been studied beforehand or the crew consults a map, they may be able to estimate ranges using landmarks.  Otherwise, the main options are the stadia reticle and using the coaxial machine gun as a ranging gun.

Above: The stadia rangefinder is calibrated to a target height of 2.7 meters, which brings it to about the level of the turret roof of the M60A3 (without the cupola).

By fortunate coincidence, the 7.62mm PKT used as a coaxial machine gun has a very similar ballistic arc to the PG-15V HEAT round within effective range (1300 meters).  Gunners who are in a hurry have the option of using the machine gun's tracers to determine the correct range, then immediately switching control to the Grom and firing a round.  Note that this will not work for OG-15V HE-Frag, which has a far more pronounced ballistic drop.

The BMP-1 has no built-in mechanism for lead compensation, and its lack of a gun stabilizer makes gunnery on the move nearly impossible.  If it becomes necessary to engage moving targets, the gunner must use some judgment and line up the target with the tick marks to the left or right of the main aiming marks.

It is also important to note that the Malyutka ATGM is not usable while moving, and attempting to drive the vehicle after the missile is launched will disrupt its flight path.

The BMP-1 is equipped with two types of 73mm projectiles: the PG-15V HEAT and the OG-15V HE-Frag.  Both are based on the PG-9 family of ammunition for the SPG-9 recoilless gun, but with smaller propellant charges suited for an enclosed gun breech.

Both rounds are best utilized at a range of 1 km or less, and the ballistic markings in the gunner's sight don't go far past 1000 meters anyway.  Long range gunnery may involve considerable difficulty with estimating drop and lead.  The Grom is strongest in its intended role as a close-range support weapon.

Unlike most contemporary anti-tank guided missiles, the 9M14 "Malyutka" uses Manual Command Line-of-Sight (MCLOS) guidance.  This means the missile does not steer itself to match an aiming mark.  Rather, the gunner must observe the tail flare on the missile and visually guide it by steering with a control stick.  This skill-reliant aiming, combined with the missile's elevated launch angle, means engaging targets at close range with the system is ill-advised.

In GHPC, steering MCLOS missiles is accomplished via the same controls as the turret movement.  Guidance is best done from the gunner's sight.  The controls will not move the turret; instead, they will steer the missile directly.  Strong input may be required to make the missile react, especially when bringing it nose-down after launch.

On the upside, the Malyutka has a 3000 meter range, and the version depicted in GHPC (the 9M14M) has an enhanced HEAT warhead that exceeds the performance of the more modern 9K111 missile system included in the game.  Players who learn how to use the Malyutka effectively will find that it rarely fails to severely damage a target, and it can sometimes turn the tide in dire circumstances.  In addition, NATO players should try to prevent AI-controlled BMP-1 units from targeting friendly units with their ATGMs, as the AI gunners are well trained in the use of the Malyutka and have a stellar hit rate.

While it's not particularly suited to outright armored combat, the BMP-1 is a capable infantry carrier and a surprisingly deadly close-range support platform.  As one of the primary assets in Pact motorized assaults, this iconic vehicle will be a familiar sight in GHPC's Cold War battlefields.  Players who take the time to learn its strengths and weaknesses will find that their efforts are well rewarded.

Thank you for reading, and we hope you enjoy playing Gunner, HEAT, PC!