The M60A3 TTS is a main battle tank (MBT) used by the U.S. Army in the 1980s.  Its main armament is the M68E1, a 105 mm cannon based on the venerable British L7 design and capable of defeating a wide array of armored and unarmored targets.  Serving as a stopgap between the aging M60A1 and the Abrams series of tanks, the M60A3 TTS saw service in Germany, bolstering the American forces stationed there in the late stages of the Cold War.  Its full designation in the American system is "TANK, COMBAT, FULL TRACKED, 105MM GUN & TANK THERMAL SIGHT M60A3".

Like all vehicles in GHPC, the M60A3 TTS has its own unique characteristics that affect its gunnery, and a skilled player will need to learn these traits.  This guide will help you learn how the M60A3 TTS works and how best to utilize it. 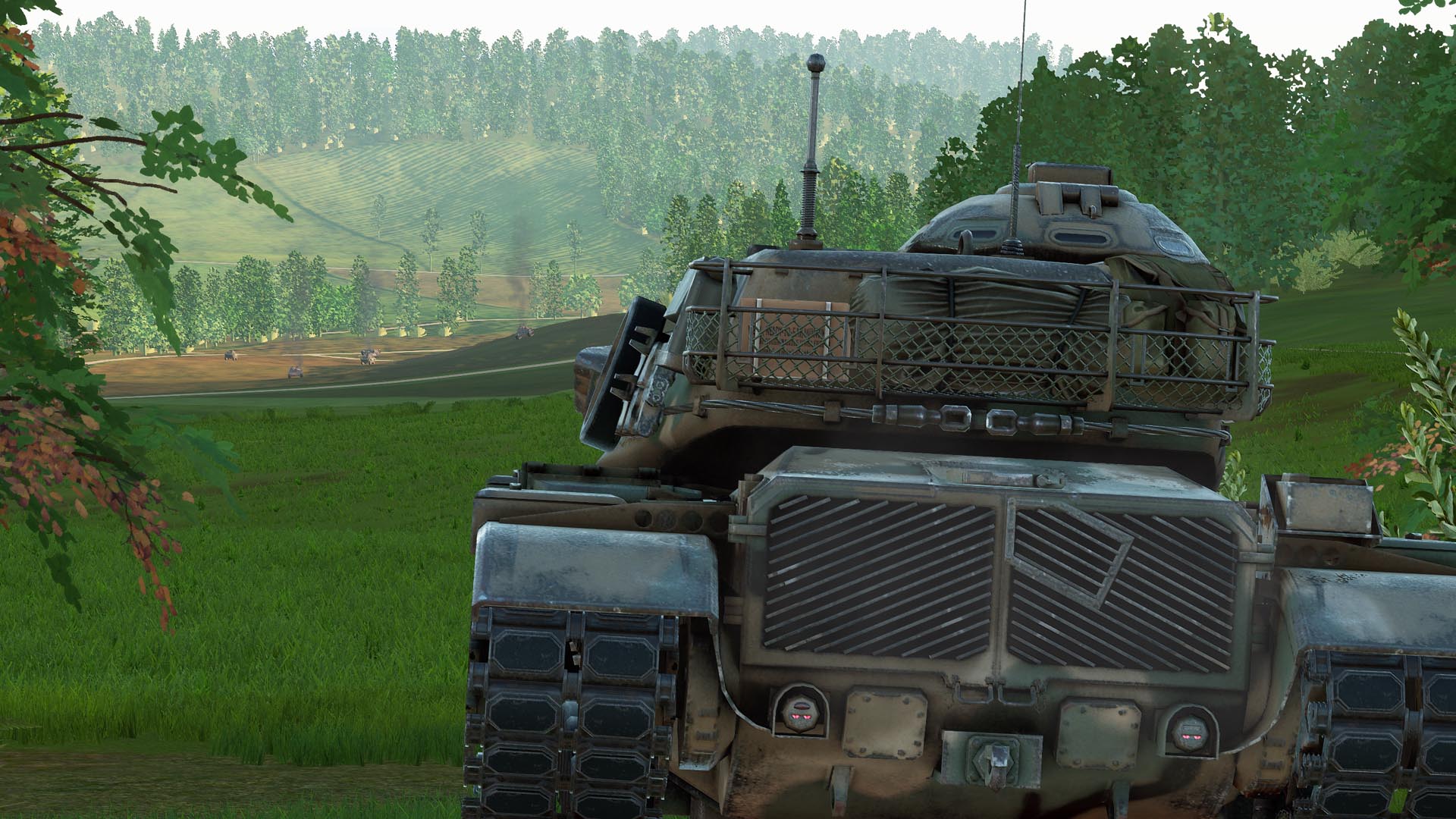 In GHPC, the M60A3 TTS is highly capable in the anti-tank role thanks to its depleted uranium M833 "sabot" ammunition and heat-sensitive thermal sight.  It also packs a punch with M456 "HEAT" rounds against lightly armored targets.  Its primary sight has a variable zoom level up to 8x, making it the best long-distance shooter in the demo as of the January 31 release. 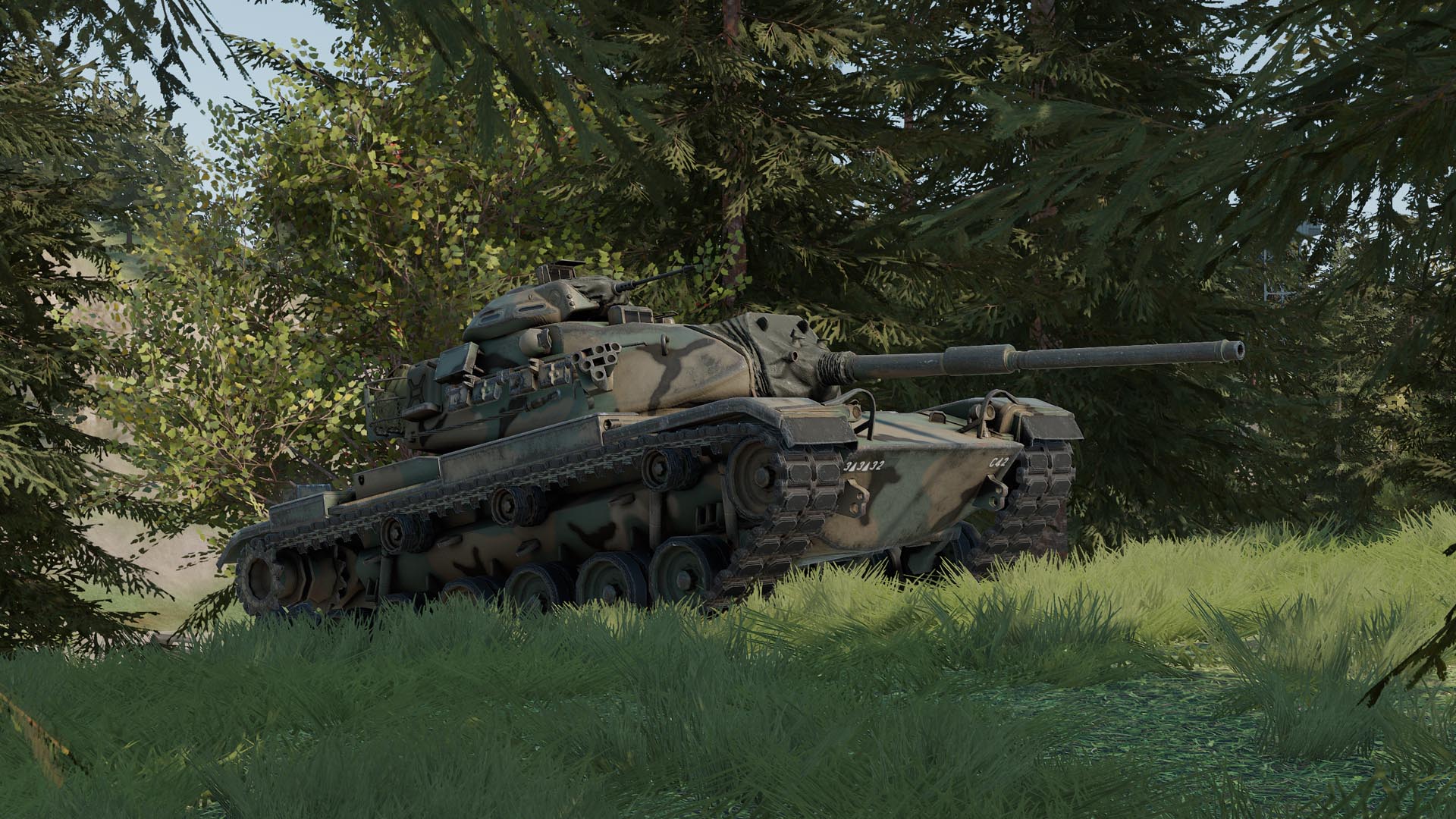 Above: The M60A3 TTS is capable of depressing its gun barrel to a considerable 10 degrees, allowing it to effectively use hull-down fighting tactics in a variety of terrain.

The M60A3 TTS gunner relies primarily on its thermal optics: the main channel of the AN/VSG-2 Tank Thermal Sight (TTS), the tank's namesake.  The sight also includes a daylight channel for target identification and backup. 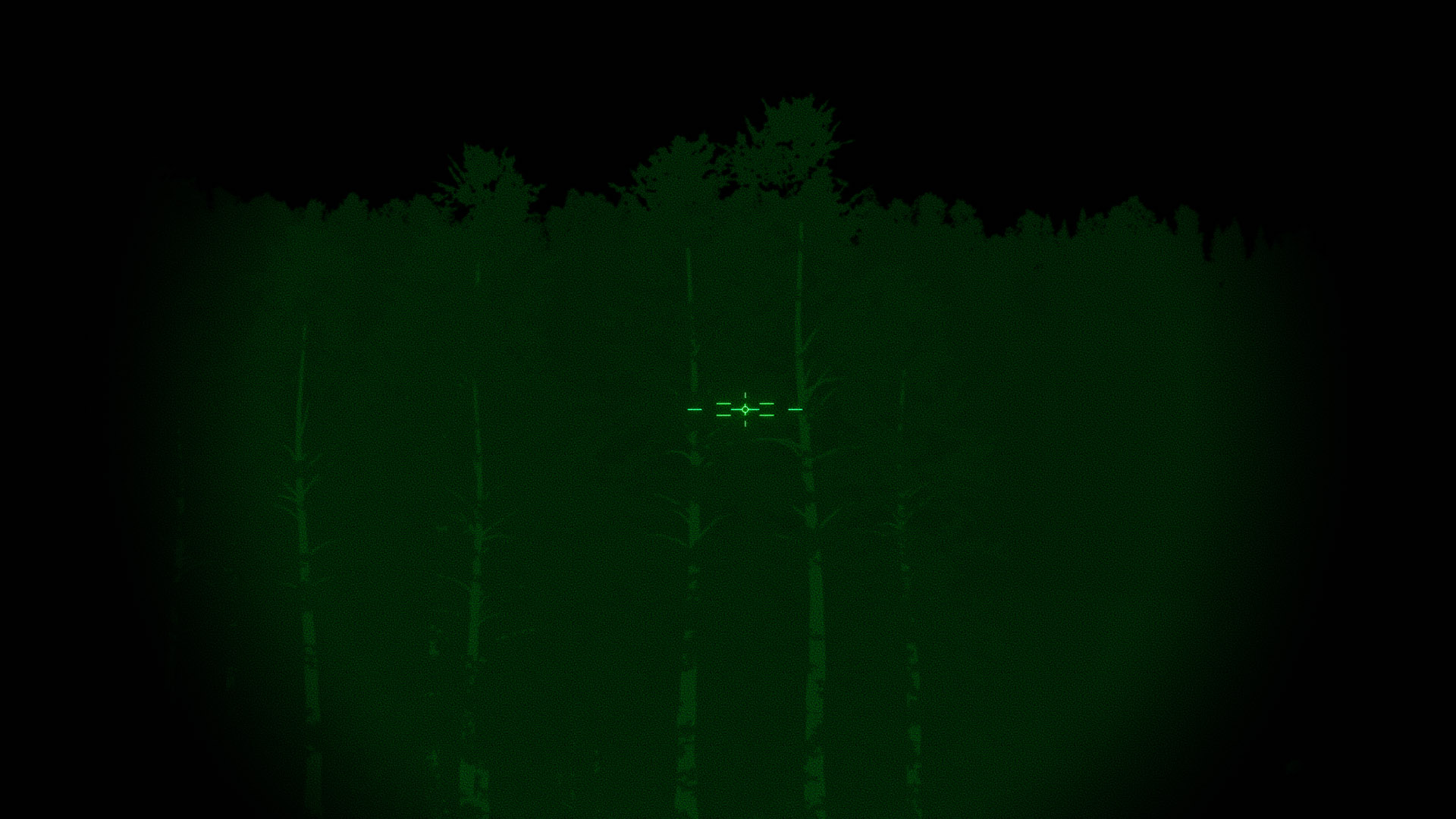 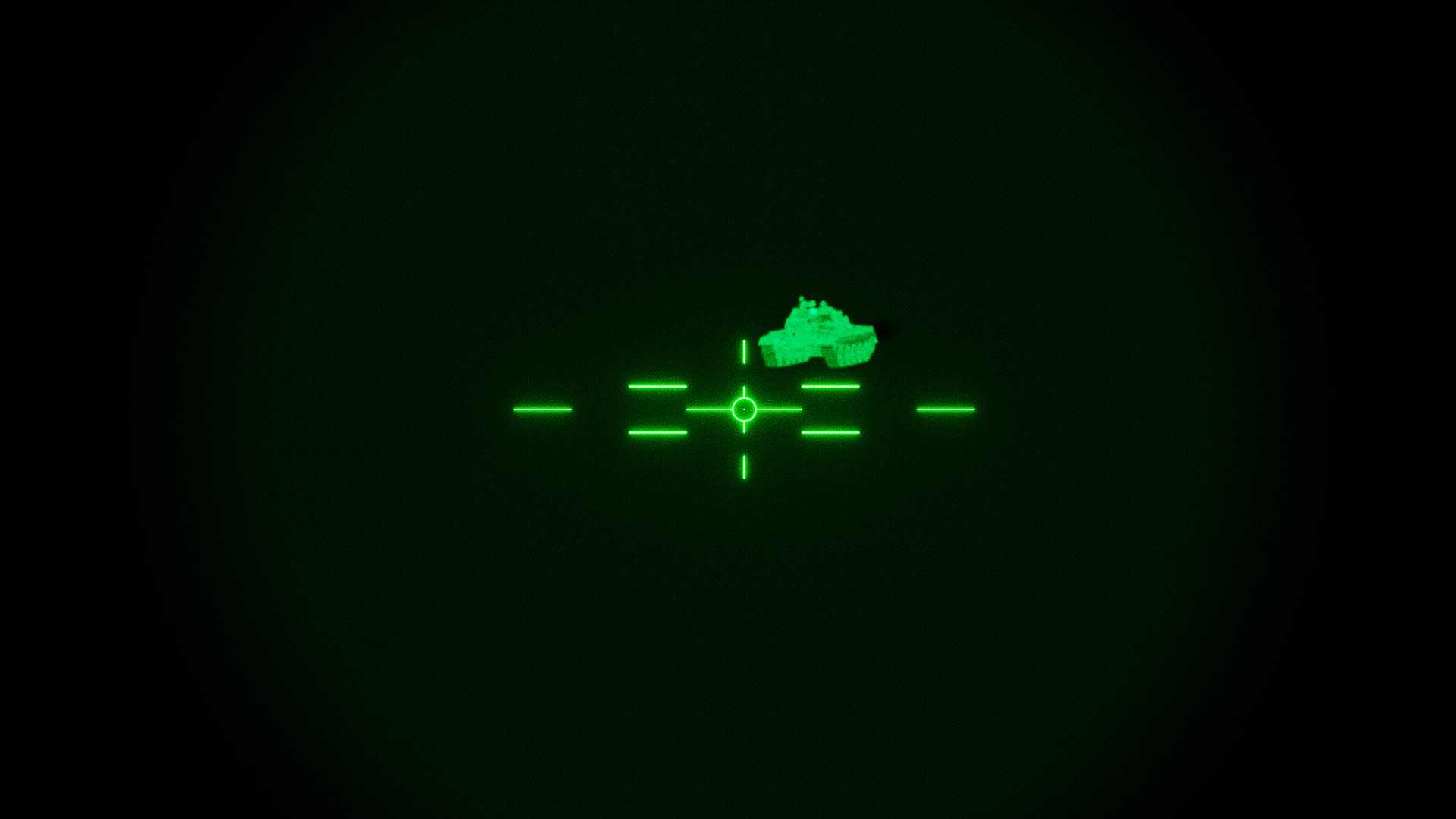 In the thermal sight, warm objects show up in brighter colors, making them stand out against the background.  This is especially useful for detecting enemy vehicles at long distance or in the dark.  It is highly recommended to use the thermal channel of the AN/VSG-2 as your primary gunsight when crewing the M60A3 TTS.

Though the APFSDS ("sabot") rounds used by the M60A3 TTS fly relatively flat out to battlesight ranges of 1 km or more, precise gunnery will require the use of the laser rangefinder.  To use this, line up the dot in the center of the reticle on the target and press the lase key (default: E).  The superelevation of the main gun will automatically be adjusted so that the currently loaded ammunition will land at the vertical level you are aiming at.  For engaging stationary targets while at rest, this is the only step required for good hits.  The M60A3 TTS does not display range information in the gunner's sight, but for ease of use, the range currently registered in the fire control system (FCS) is displayed in the weapon HUD on screen.  (Note: in reality, operating the laser rangefinder in the M60A3 TTS was a rather more complicated process involving both the gunner and the commander.  It is simplified in GHPC for player convenience.)

Some situations will require engaging moving targets at long range.  In these instances, simply aiming at the center of the target won't work - by the time the round reaches the correct distance, the target will have moved away from the impact point.  Therefore, the M60A3 TTS comes with a system to offset the aim point for "lead" (pronounced "leed") and hit moving targets. 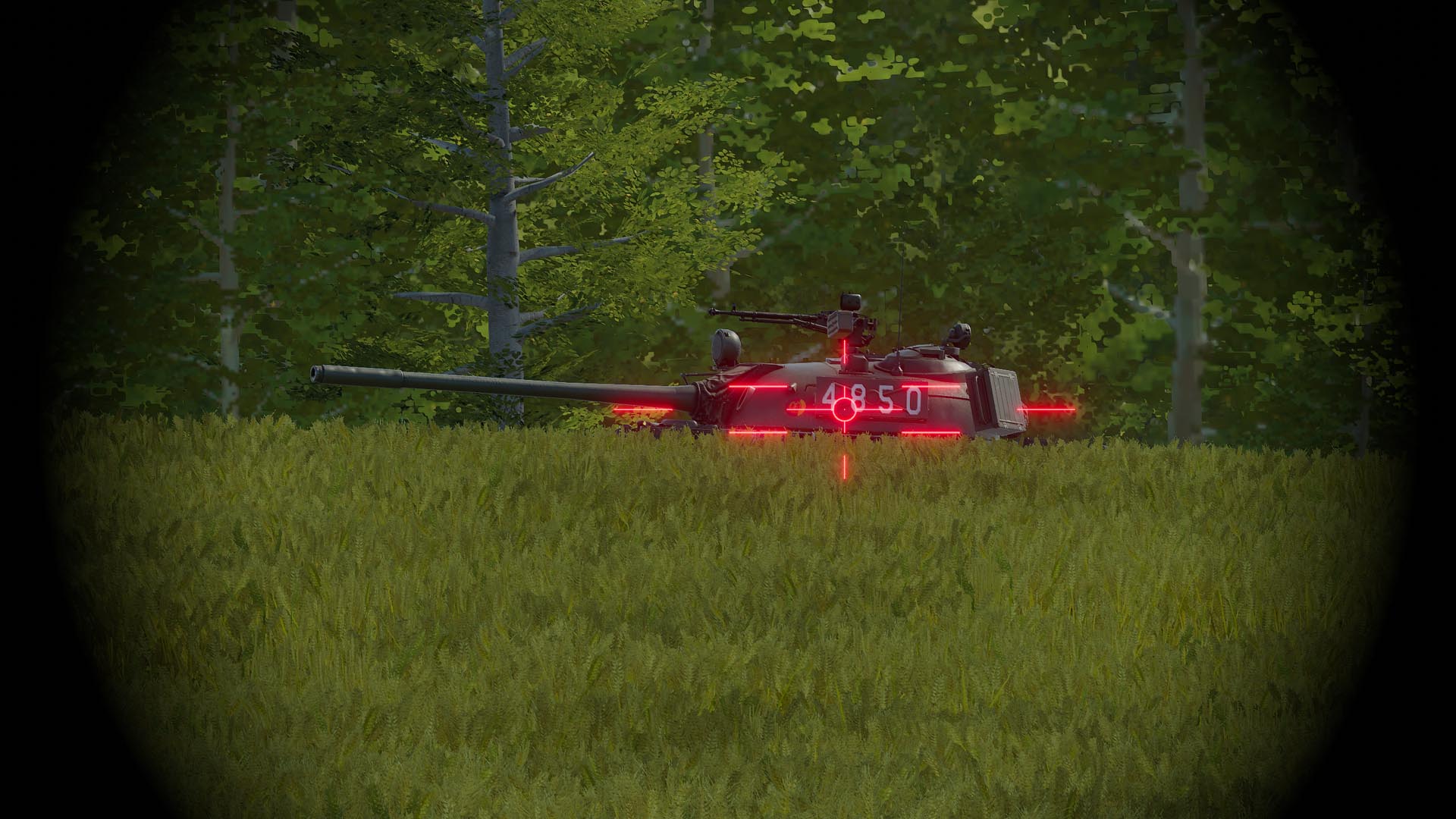 Above: Aiming at a moving tank at close range with the correct amount of lead induced

The lead system works by averaging the angular rate of traverse (horizontal aim movement) and elevation (vertical aim movement) from the previous 1.5 seconds.  In GHPC, this is automatically applied when you use the laser rangefinder.  The FCS calculates how far a target at the currently registered range would travel if the gun is following it at the averaged angular rate, and it shifts the reticle (and the gun's aim point) to be "ahead" of the target by the correct amount.  Thus, if you hold a steady track directly on a target for 1.5 seconds and then lase it, you will have the correct firing solution, and firing immediately should result in a hit.  (Note: the technique of firing immediately after lasing to reduce error is sometimes called "lase and blaze".)  The reticle will remain in its new position until the system receives new instructions to move it again.

Unfortunately, this lead system has a significant flaw: if you move the turret immediately before lasing a stationary target, the FCS will interpret this as if you were tracking a moving target.  It will then induce lead and shift the reticle and aim point, resulting in a miss if you fire without correcting it.  There are two ways to correct this issue: (1) place the reticle on target and wait at least 1.5 seconds before lasing a stationary target, or (2) "dump lead" by quickly releasing the aiming controls.  You can also dump lead with a dedicated command, accessed via the quick menu (default: Q) or the key shortcut (Ctrl + lase, default: Ctrl + E). 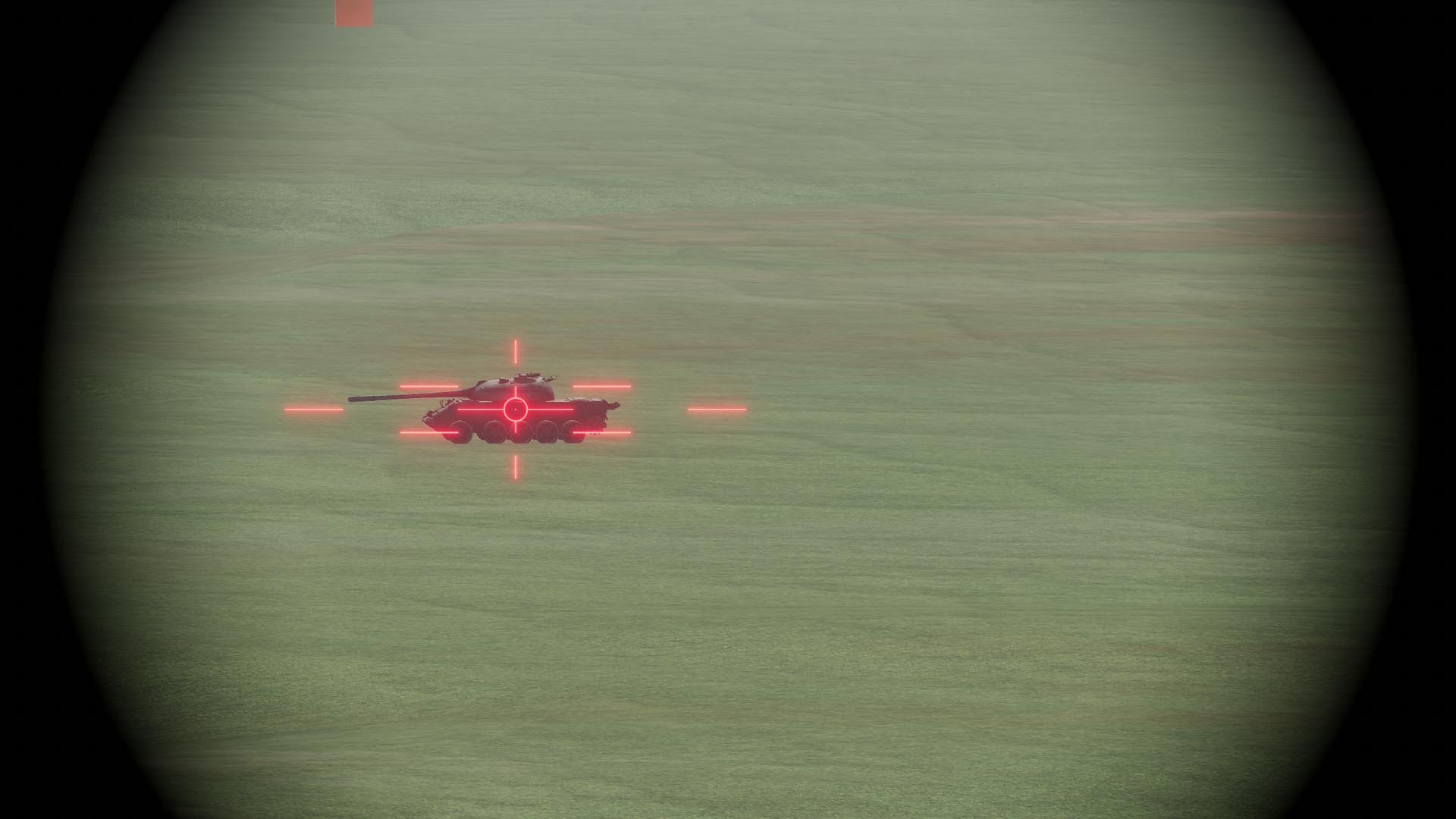 Above: the aim shift resulting from a rapid rightward traverse onto a stationary target before lasing
Below: the result of dumping lead after the error is noticed 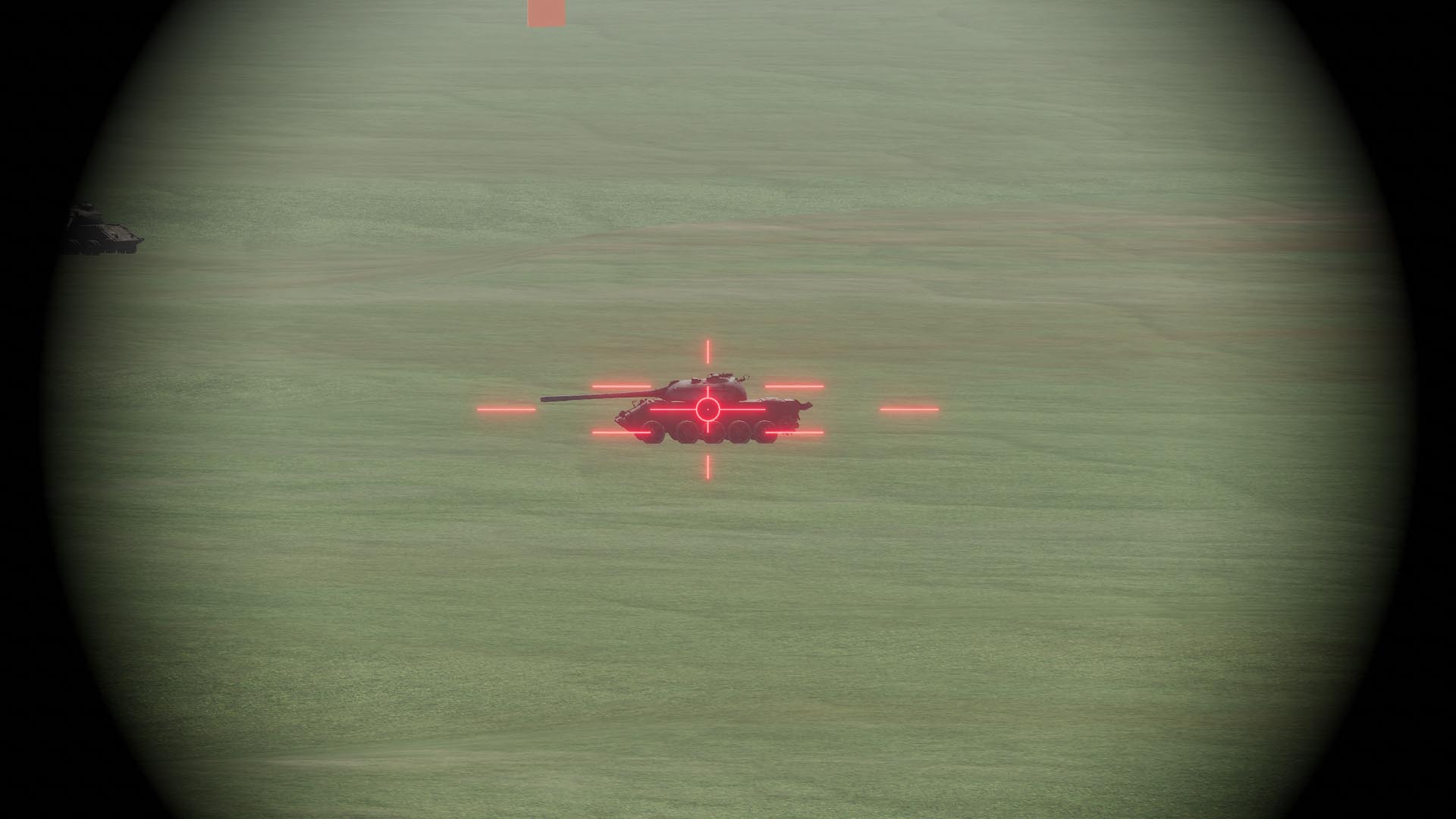 A note about firing on the move

While the M60A3 TTS fire control system very basic and based on mechanical linkages (as opposed to the digital system of the M1 Abrams), it is actually capable of compensating for the tank's own momentum in ideal circumstances.  As the reticle does not update its position live, the gunner must make absolutely certain that the tracking on target is steady for a full 1.5 seconds before performing a lase, regardless of what movement is involved.  If the velocities of the M60A3 and its target are unchanging, the palm switches are held, and the gunner achieves a proper track and lases, the shot should hit.  Still, this type of leading shot from a moving tank can be challenging, especially on uneven ground.  It's usually advisable to fire from a stationary position.

The M60A3 TTS is equipped with a fully enclosed cupola mounting an independently aimed M85 .50 caliber machine gun.  In GHPC, this weapon can be selected by cycling to it in the weapons list (default: square brackets [ ] ).  The M85 is devastating against thin skinned vehicles at close and medium range, and its enclosed firing position allows the commander to operate it safely.  (Note: as of the initial January 31 release of the public demo, the commander's sight for the M85 is not yet available, but you can still aim it from third person view or by watching its tracers through the gunner's sight.) 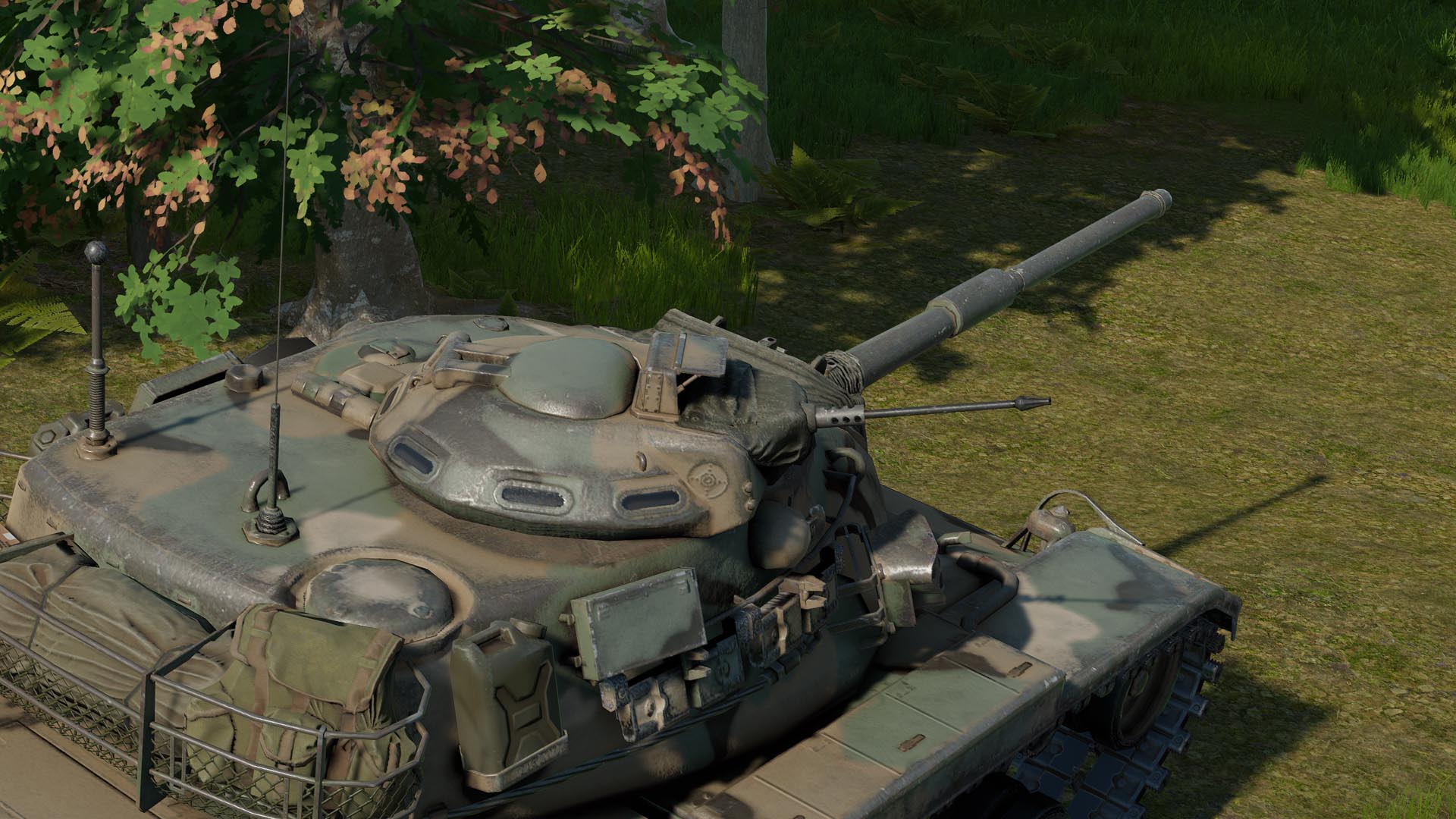 The M60A3 TTS in GHPC comes standard with two highly capable main gun ammunition types: M833 Armor-Piercing Fin-Stabilized Discarding Sabot (APFSDS or "sabot") and M456 High Explosive Anti-Tank Fin-Stabilized (HEAT-FS or "HEAT").  The M833 is best used against heavy armor, such as other tanks, as it flies fast with a flat trajectory and is capable of defeating all but the most advanced armor in the time period.  For lightly armored targets and general purpose destruction, it's best to switch to the M456, which offers decent blast damage and a shaped charge warhead that's capable of defeating even some tank armor.

Above: Various types of 105 mm tank ammunition in GHPC, including the M833 (left) and the M456 (right). Note the breakaway sabot petals and the armor piecing dart projectiles. The M833 and M900 (top) have cores made of extremely dense depleted uranium alloy for superior armor penetration.

The M60A3 TTS, though showing its age in the 1980s, had the benefit of an adequate FCS and state-of-the-art optics.  With careful defensive maneuvering and a proper understanding of the gunnery systems in the M60A3 TTS, you will be able to use it effectively in whatever situation is thrown at you.  Thank you for reading, and we hope you enjoy playing Gunner, HEAT, PC!

· 1y ago
M60A3 TTS is no match against the T-55A, and comparatively lacks in firepower. The FCS is very basic to an extent where you are probably better off compensating and leading your target, unless very long-distance engagements require it, whereas the glorious T-55A has superior gun-sight for ranging your targets, that does not rely on FCS.

To give credit where credit is due, the thermal sight is way more crisp compared to  TPN-1-22-11 night sight found on T55-A and the TPN 1-49-23 night sight found on T-72M1, and as a bonus, the night vision on M60A3 is not reliant on an IR spotlight, which gives it a significant advantage at night-time combat.