The T-72 is one of the most recognizable and widely used tanks in the modern world.  Its variants have served in numerous conflicts, and a thoroughly modernized version continues to serve as the primary combat tank of the Russian Federation to this day.

In GHPC, the East German Nationale Volksarmee (NVA) uses the T-72M1, the export variant of the T-72A.  This is one of the strongest NVA tanks available in the 1980s, and despite not having access to the most up-to-date Russian ammunition, its composite armor and 125mm main gun make it a serious threat.

This guide will teach you all you need to know to effectively utilize the T-72M1.

The main advantages of the T-72M1 are its strong main gun, low profile, and composite frontal armor.  These traits make it highly capable in a defensive hull-down position, and it can resist even the American 105mm M833 APFSDS projectile across much of its frontal area.  The tank also features an autoloader, the legendary "AZ" system, which gives it a reliable and consistent firing pace with only 3 crew members.  To top it all off, the TPD-K1 FCS, with its laser rangefinder and 8x magnification, makes gunnery simple and effective. 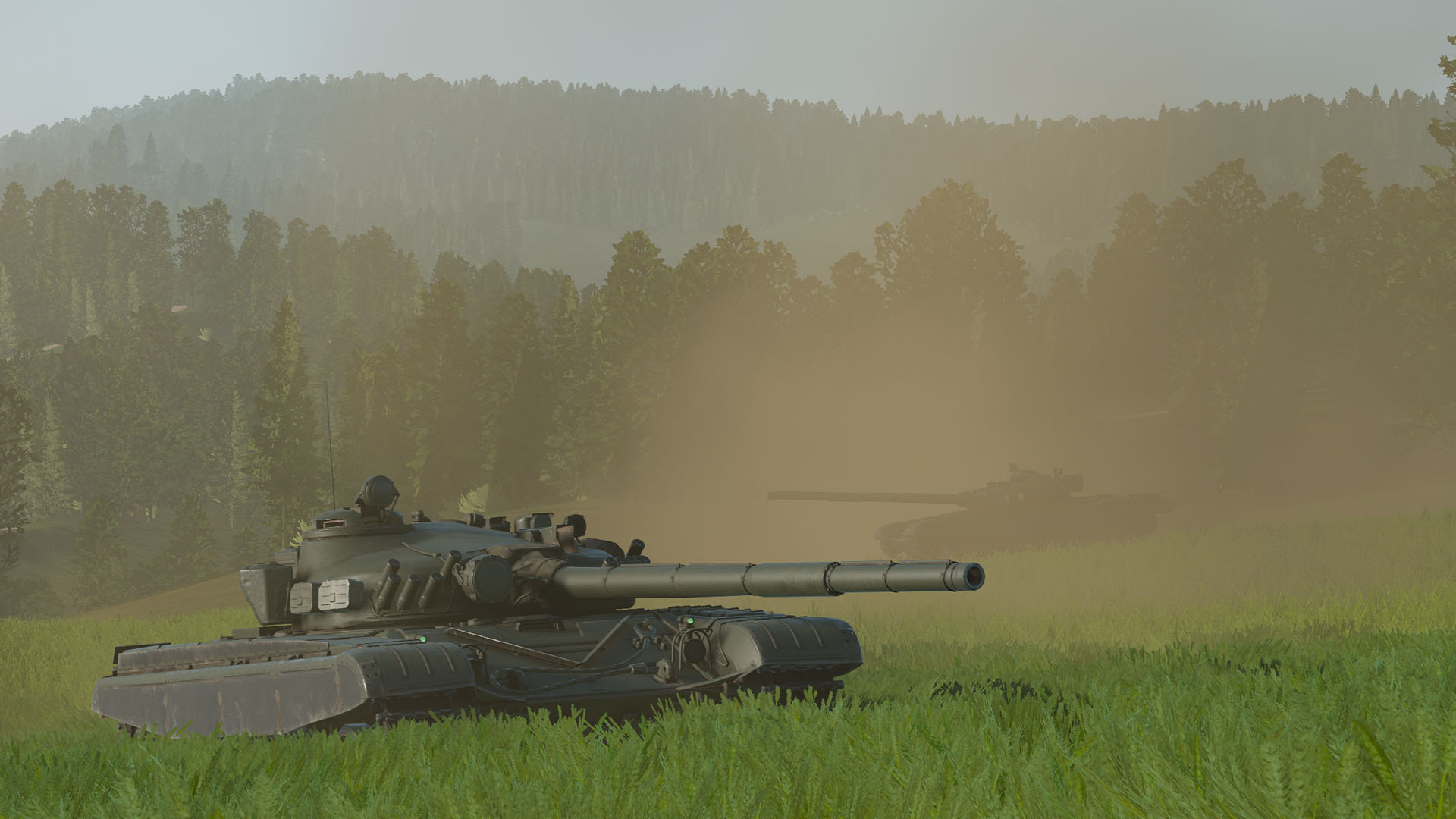 Above: While not outfitted with the latest ammunition or digital systems, the T-72M1 is still a highly capable tank and should not be underestimated.

Operation of the T-72M1's main weapons is accomplished with the aid of the TPD-K1 sight complex.  This system includes a laser rangefinder paired with automatic superelevation and an analog ballistic computer, forming a basic fire control system.  This FCS in its early form lacks any automatic lead compensation, but for stationary targets, it will deliver highly accurate fire.

Unlike the sights used in the T-55 and T-62, with their row of vertical range scales for various ammunition types, the TPD-K1 features a single range wheel and a sliding reticle plane that uses the ballistic computer to adapt to the current ammo selection.  This makes the gunsight significantly less busy and reduces the effort required to properly read it. 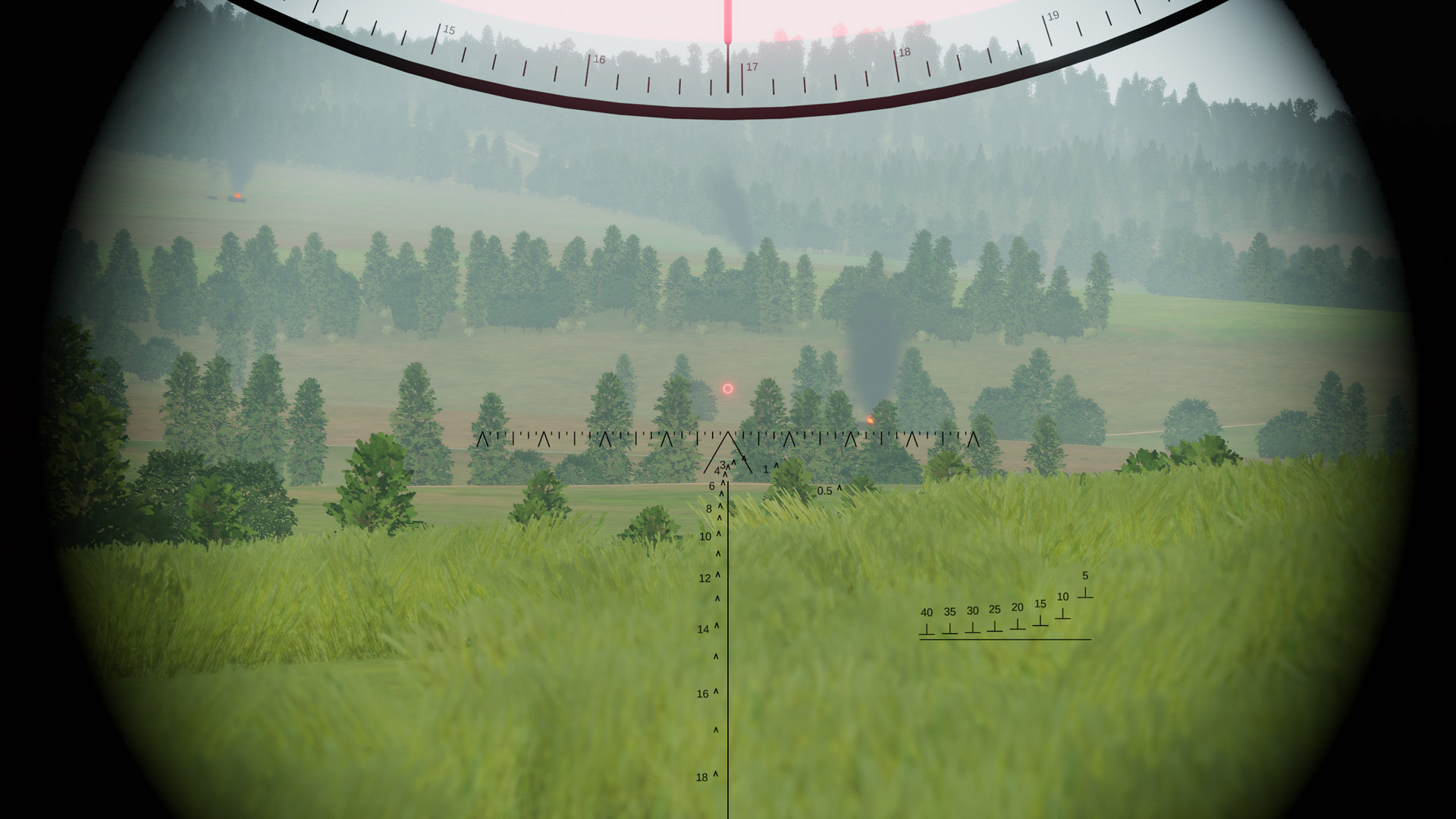 Above: The range wheel in the TPD-K1 sight complex encloses the "ready to fire" lamp, which takes the form of a red circle dipping into the top of the gunner's view.

The TPD-K1 has a fixed 8x magnification, which is sufficient for use out to typical combat ranges of about 2 km.  The numbered markings arrayed vertically beneath the main aiming mark are intended for aiming the coaxial PKT machine gun; all main gun ranging is done via the range wheel at the top.  There are also stadia rangefinder markings in case the laser rangefinder is not operational.

Like other vehicles with this type of system, the T-72M1 uses the lase key (default: E) to operate its rangefinder.  The laser return is nearly instant, but the gunner's sight will take some time to automatically rotate the range wheel to the correct number.  As the range wheel adjusts, the main gunnery reticle will slide vertically to compensate for the new superelevation required for that distance.

Of special note is the fact that the laser rangefinder's alignment is not consistent from tank to tank.  It will be slightly different for each vehicle, based on installation imperfections and disturbances from wear and tear in the field.  The red circle always shows the exact aim point for a particular example of the sight system, and you should always use it when lasing targets.

The T-72M1 has no built-in mechanism for lead compensation, nor does it account for the tank's own momentum imparted to shots on the move.  It is most accurate from a stationary position against a stationary target.  If it becomes necessary to engage moving targets, the gunner must use some judgment and line up the target with the tick marks to the left or right of the main aiming mark.

A rather unique feature in the T-72M1 is the automatic traveled distance compensation, known as "delta-D".  This system engages automatically after a lase.  While it is active, it uses the vehicle's turret rotation and wheel speed to estimate the change in firing range to a stationary target.  For example, if you engage delta-D by lasing at 1300 meters, then drive 100 meters toward the target, your range wheel will roll back to 1200 meters during the drive.

It is possible that you will encounter a situation where you do not wish to use delta-D.  If this is the case, you can cancel delta-D using the dump lead shortcut, which is Ctrl+lase (default: Ctrl+E).

Much like other Soviet armored vehicles of the era, the T-72M1 is equipped with a night vision sight of the image intensification type.  This sight functions by amplifying light with the use of a phosphor film, which gives it the characteristic green tint.  The T-72M1 has a TPN-1-49-23 night sight, a first-generation night vision device with decidedly poor performance compared to later models.  In order to be effective, it requires the assistance of an infrared (IR) illumination spotlight (in this case, the Luna 2 spotlight mounted near the base of the gun).  Even with the IR light switched on, the night vision system is only effective inside of 1 km.  The sight has a fixed magnification of 5.5x and does not visibly adjust for range or ammunition selection.

In GHPC, the night sight is accessed via the T key by default, and the IR spotlight can be switched on via the quick menu (default: Q) or a direct shortcut (default: N).

Above: comparison of an object at about 500 meters distance, without the IR illuminator (left) and with it (right)

Below: targets observed from about 800 meters with assistance from Luna 2 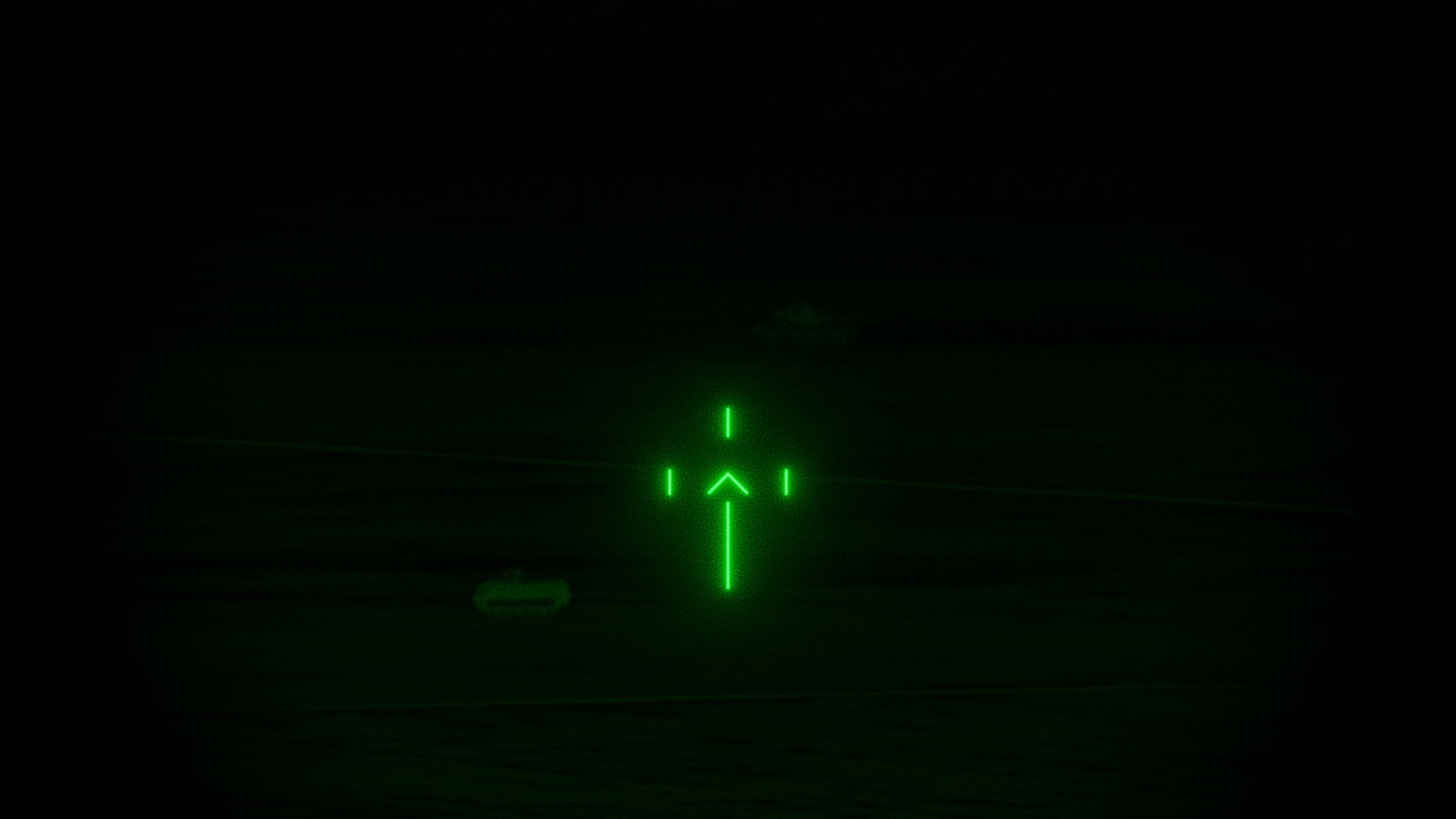 The night sight on the T-72M1 is not resistant to bright light and could be permanently damaged by overload.  To guard against this, it is covered by a solid cover during the day.  In GHPC, the covers for the Luna 2 and the TPN-1-49-23 are automatically applied and removed based on the time of day.

NOTE: The T-72M1 has a safety shutter that physically blocks the night sight when the trigger is pulled, in order to avoid sensor damage from the bright muzzle flash.  Because of this feature, you may notice the sight picture turn black for a moment when you fire, or even if you pull the trigger without a round ready.  This is normal.

The illumination assisted ("active") IR night vision has some notable flaws that a prudent player should keep in mind.  For one, any vehicle using an IR intensifier night sight will be able to see your spotlight and its beam.  This can give away your position quite easily, and if the enemy vehicle does not have its own illuminator, the battle will be very one-sided. 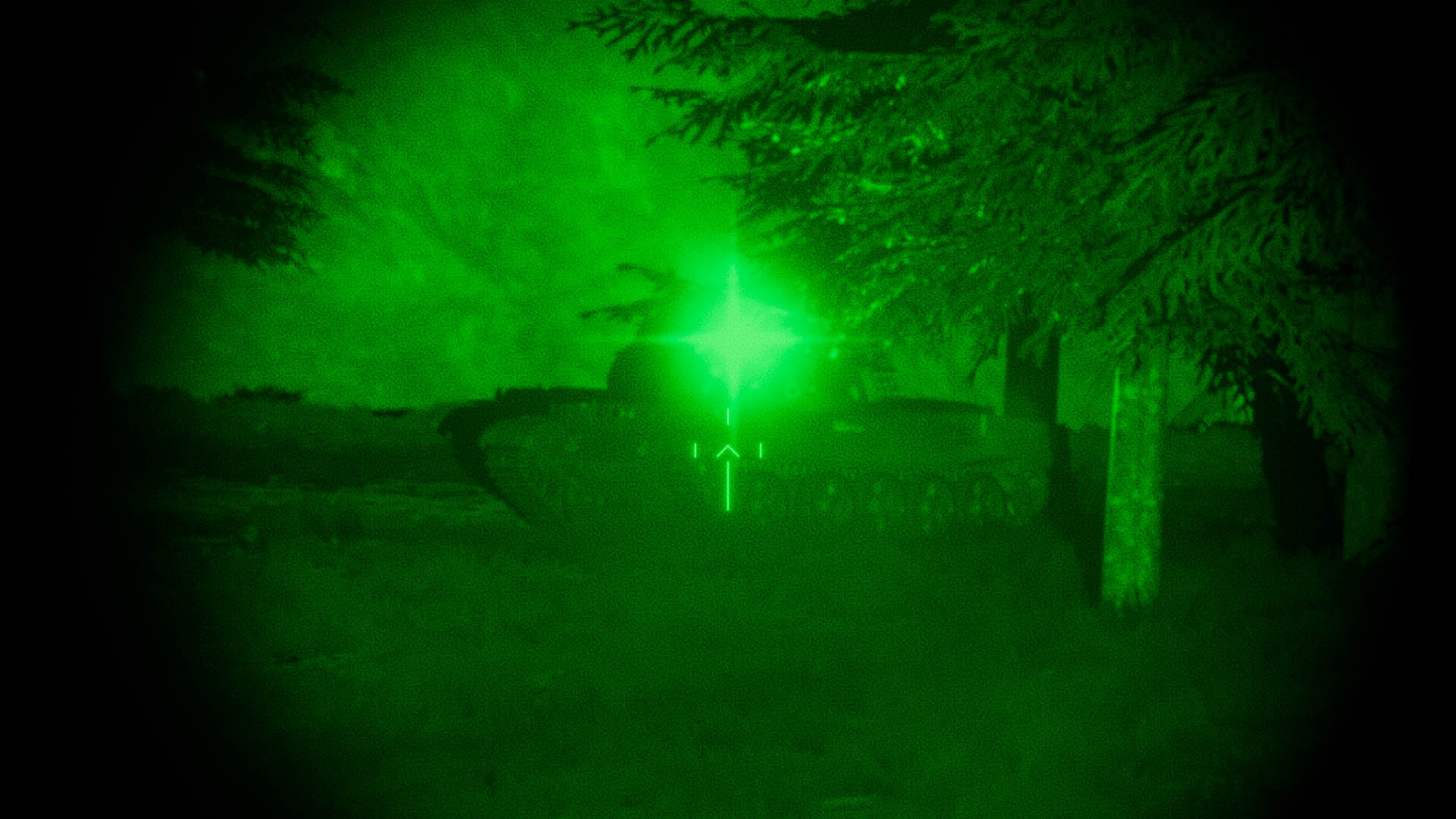 Above: Using the night sight to observe another vehicle whose IR illuminator is switched on.  Note the stark offset shadows from the viewing vehicle's own spotlight.

Below: Using the beam from another vehicle's IR illuminator to observe the area ahead without revealing one's own position 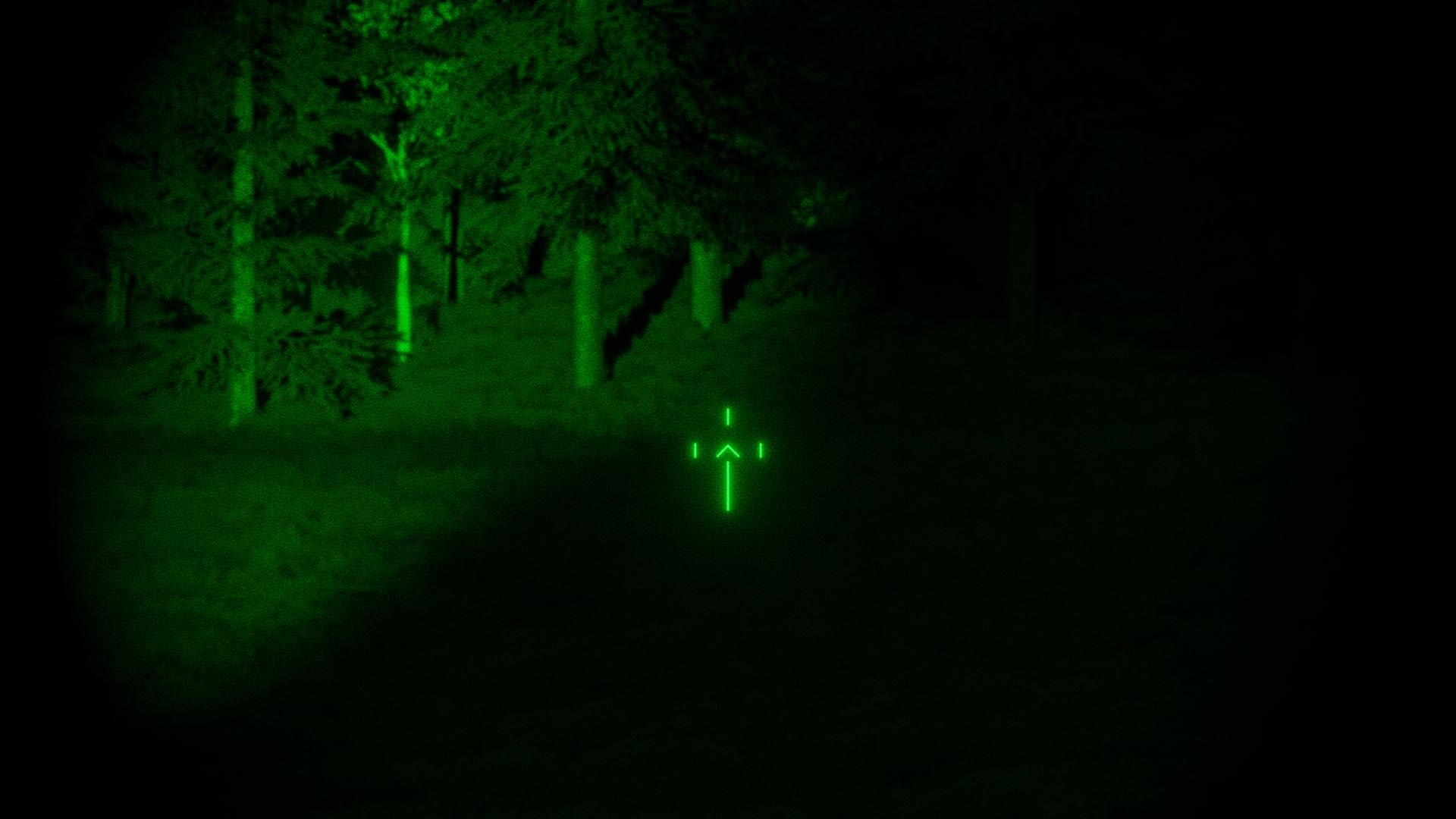 Another annoyance from the use of active IR night vision is the intensity with which dust and smoke are picked up in the view and block effective vision.  The spotlight will glare off of any suspended particles, rendering the system essentially useless until things settle. 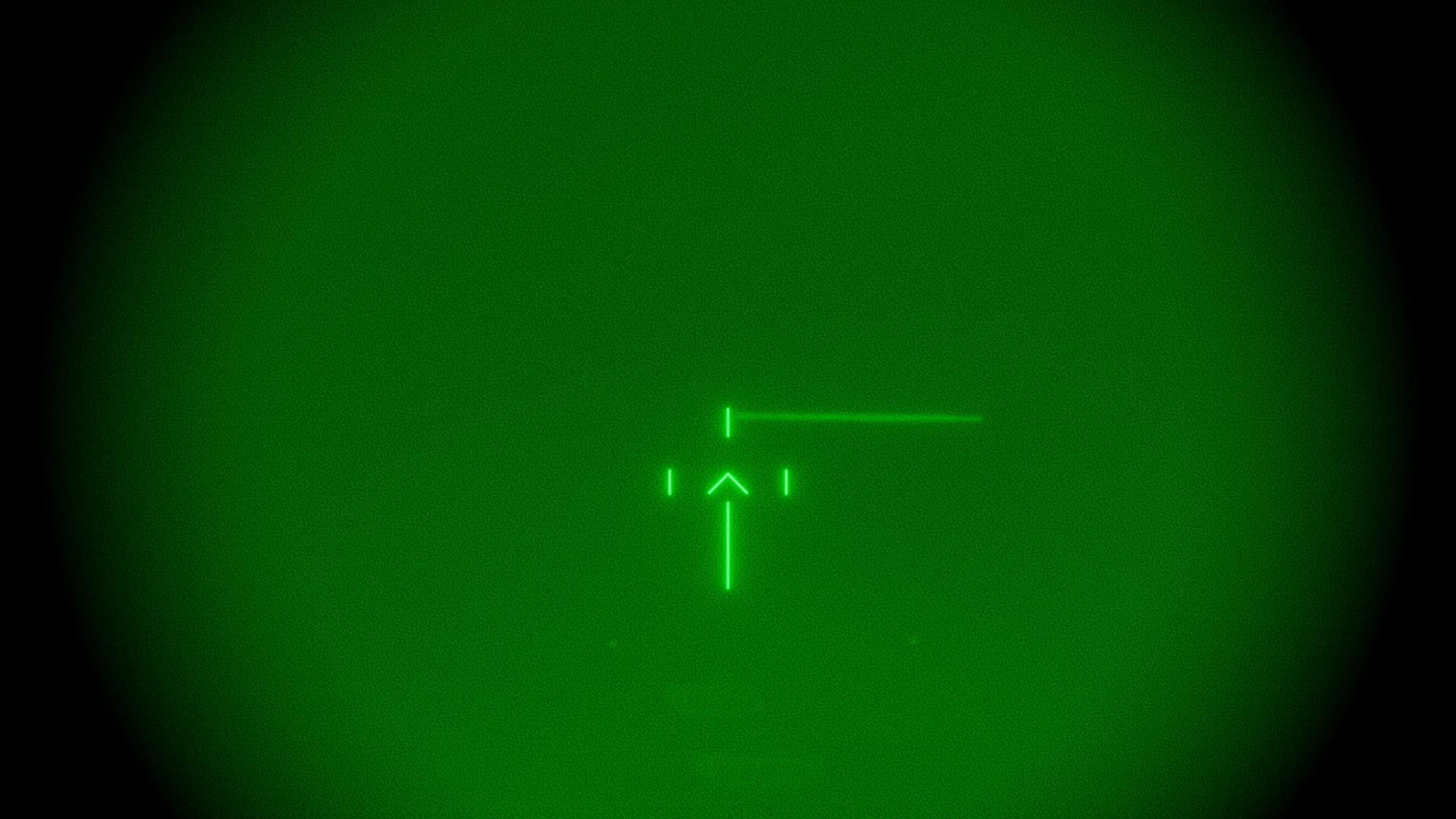 Above: Attempting to observe an ongoing battle through the cloud of dust kicked up by the viewing vehicle's own main gun

There is one more option for low light combat aside from the night sight: the day sight's reticle can be illuminated in the orange color typical of Russian optics.  This is likely not the best option for true night conditions, but it can help in low light or if the background is too dark to properly read the reticle.  In GHPC, reticle illumination is controlled via the I (i) key by default.

The T-72 series features the 125mm 2A46 gun, using two-piece ammunition fed by the "AZ" autoloader.  The AZ system uses a compact carousel in the base of the turret basket to serve up ammunition selections via an automatic loading mechanism at the rear of the fighting compartment.  This carousel is protected against fragments by steel shields on the top and sides.

During the reloading process, the carousel automatically seeks and selects the nearest possible ammunition pieces that match the desired type, rotating strictly in a counter-clockwise direction.  The number of slots that must be traversed to reach the goal will affect reload time, and this will be noticeable in audio cues as well as X-ray view in the game.

Special care must be taken to avoid exposing the sides or rear of the vehicle, as it is filled with reserve ammunition (up to a full reload of the AZ carousel) and has very little protection outside of the frontal aspect.  Kinetic damage to the propellant casings or warheads can very easily cause catastrophic damage to crew and systems, or even throw the entire turret from the hull. 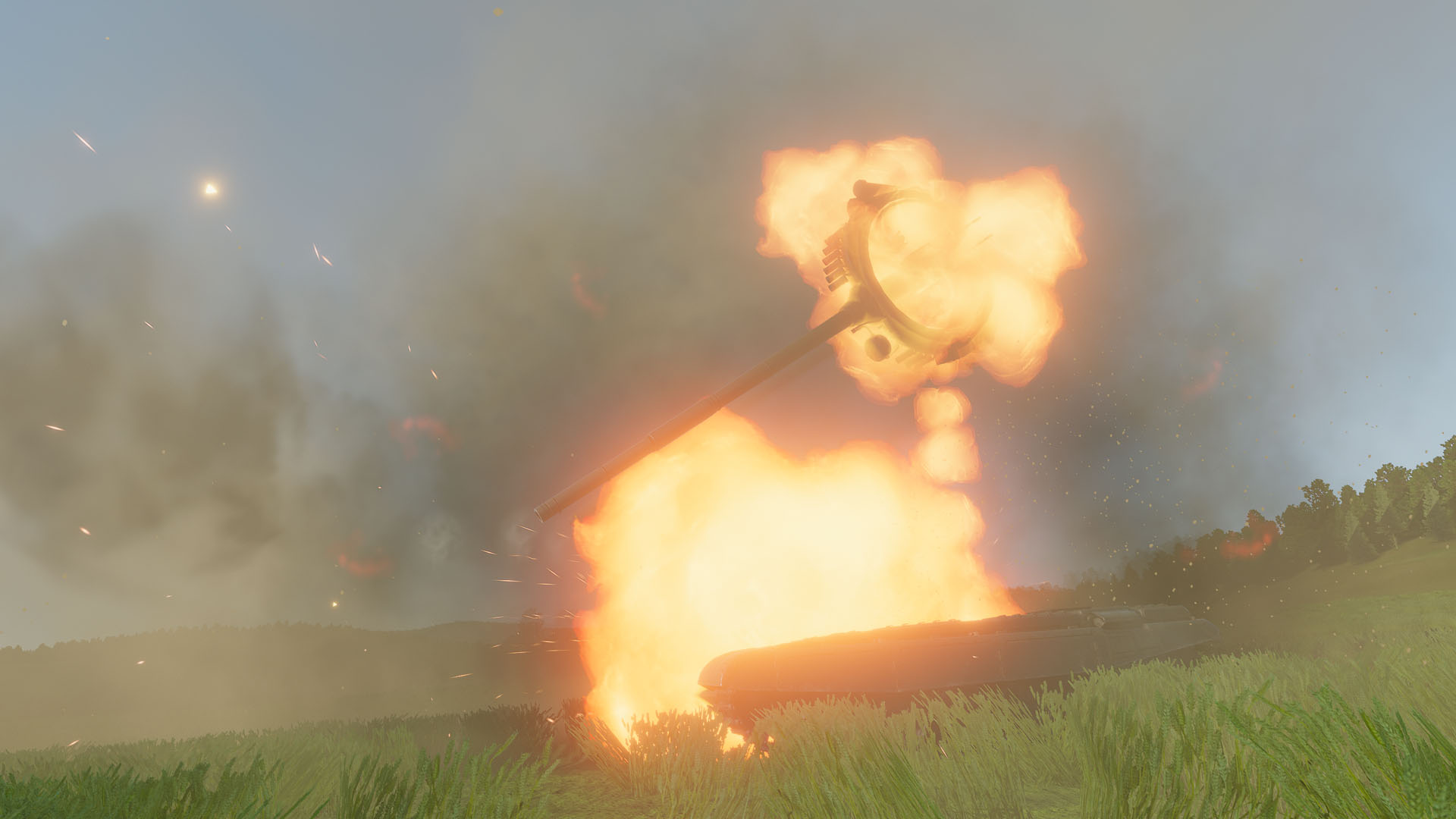 In GHPC, the T-72M1's ammunition load is a mix of APFSDS, HEAT-FS, and HE-frag.  As usual, the APFSDS is good for long range accuracy and defeating heavy armor, the HEAT-FS is a medium duty round that works well against light armored vehicles, and the HE-frag is devastating against unarmored targets and infantry.

Unfortunately, the East German T-72M1 did not have access to advanced Russian APFSDS ammunition, so its strongest round is 3BM15.  When facing opponents with composite armor, care should be taken to aim for weak points if possible.

As the flagship tank of the NVA armored forces, the T-72M1 is a strong combat vehicle that can hold its own when used correctly.  Deployed in large numbers as part of a mechanized assault or defense force, it presents a formidable opponent for NATO forces.  Thank you for reading, and we hope you enjoy playing Gunner, HEAT, PC!

· 472d ago
formidable? Well I know some people were we have here a real Problem with that word on t72, the t72 were not a enemy for first line tanks of the nato, that was never there planned job and so they knew one thing, mass of them for a attack. With the armor its wrong, at castle martin we did shoot in 1992 on some t72, their armor was filled with concrete, steel trash and sand, till today i got fotos of how a leo1 even could penetrate these t72, t62 and t55 with no problem, not to mention the leopard2a4 and lesser version. Even the ones with real armor... well its was never real composite armor more of spaced armor... Leopard2 would have and did have proven to be better than t72 of the time, as well that was a victory for all nato tanks. But, on all critic, its nice progress its nice see the detail love and the game takes shape. with best regards
Reply 1 Like